Alfred was the eldest son of Alfred Skinner Quintrell and Annie Beswetherick.  Both Alfred and Annie were born near Newquay; the Quintrells were farm labourers living between St Mawgan and St Columb Major, whilst the Beswethericks were blacksmiths in St Mawgan.  For some reason Alfred and Annie were married in Dartford, Kent and they spent the early years of their marriage in London, Alfred working as a wheelwright.  The couple had another son, Frederick Skinner Quintrell, born on Christmas Day, 1895 and a daughter, Edith Dorothy born on 4 March 1901.

I do not know when the Quintrells moved back to Cornwall.  However, at some point they moved into Newquay and took up residence in St Cuthbert's Road.  Alfred joined the Navy and was aboard HMS Black Prince when she set sail on 31 May 1916 to meet the German Grand Fleet off the coast of Denmark.

Black Prince was part of the 1st Cruiser Squadron.  At 5.45pm the squadron was ordered to take up approach stations.  Somehow the ship became detached from the rest of the squadron when the Grand Fleet were deploying.  As night fell Black Prince continued to try to find the rest of her fleet.  Perhaps mistaking them for the British Fleet, she approached a flotilla of ships.  It was a deadly mistake - she headed straight for a squadron of German ships.  From distance of only 500 yards the engagement was swift.  Nassau, Thuringen, Ostfriesland and Friederick Der Grosse all fired on the Black Prince which was unable to mount a challenge.  She was quickly overtaken by fire and sank with an huge explosion in less than five minutes according to German eyewitnesses.  857 men were lost. 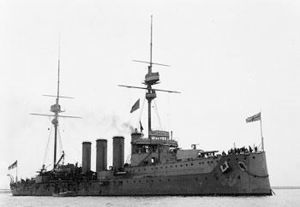 Alfred's grave is in Newquay, along with his parents.  His "Dead Man's Penny" is set into the gravestone.  His brother Frederick died in 1980, whilst Edith married and lived until 1976.   I left some flowers at Alfred's grave today to mark the 95th anniversary of his death.
Posted by Unknown at 14:01