On this day in 1918 the SS War Grange was torpedoed by an enemy U-Boat in the Bristol Channel some 7 miles off Newquay's Towan Head.  The town's lifeboat was launched to help the stricken vessel, but five of the steamer's crew were lost.  They are commemorated on a plaque in St Michael's Church and are buried in the town cemetery.

The SS War Grange was a new 3,100 tonne steamer, built the previous year.  She worked the Bordeaux to Cardiff route.  On 15 May she was attacked when approximately 7 miles north of Towan Head by U 55 under the command of Wilhelm Werner.  The Newquay lifeboat was launched to aid the stricken steamer; this was the first launch for a new boat, the John Stevens 5 having been lost the previous year.

The steamer was brought up onto Towan Beach where it remained until salvaged.  The photograph shows the ship lying just outside Newquay Harbour at Towan Beach. 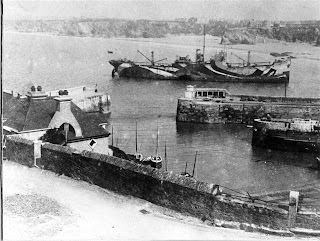 Although the men are not commemorated on the war memorial, there is a plaque in St Michael's Church, which reads:

Frank Selby (born c 1873) of Westcliff, Essex left over £3,000 to his brother, Thomas Selby.  Walter Klotz (born c 1876) was from Durham and left a widow, Mary Park Klotz.  John Appleby was 21 years old when he died whilst James Mann was only 17.  According to the death index Abdul was born around 1880. 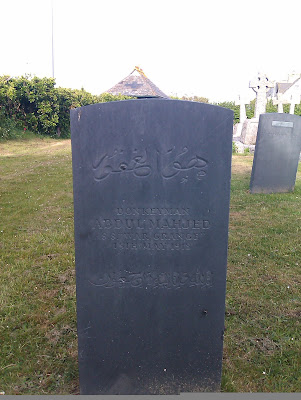 Abdul Mahjed's Grave Marker in Newquay Cemetery
I have not been able to access much information about the SS War Grange this week - I know that Newquay Old Cornwall Society have information in their archives, but can't visit until half term.  I would like to acknowledge the Newquay RNLI website where I found the photograph (visit them here for more photographs of Newquay's past lifeboats) and UBoat Net for the information on U 55.
I had also hoped to visit the cemetery this afternoon and lay some flowers, but my daughter is ill today, so it may have to wait.
This post will be updated when I find more information - I just thought it fitting to post something on the anniversary of the crew's loss.
Posted by Unknown at 05:56