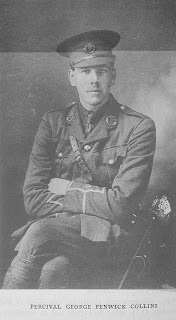 Percival was the younger son of Thurstan Collins and Ellen Fenwick - see the post about his older brother Gerald.

Percival was at Rugby School in 1911.  Meanwhile, his parents and sisters were living at their new house "Gluvian" in Newquay's Edgcumbe Gardens.  The Cornish architect Silvanus Trevail is credited with designing the house for Mr Collins, but more recent research suggests that it was in fact one of his partners who was responsible.

Sadly Percival's military records do not survive, but his medal index card indicates that he was in the Coldstream Guards before joining the DCLI.  6th Battalion moved to France on 22nd May 1915 with 43rd Brigade, part of 14th (Light) Division.  The Division were at the Action of Hooge, near Ypres, when the Germans used a flamethrower for the first time during the early hours of 30 July 1915.  The British were forced to fall back from the front line, but regrouped and started to rush men up to hold the ground.  The 6th Battalion DCLI were one such battalion, ordered to secure one section of the front near Zouave Wood.  According to the account of Lieutenant Blagrave,

"They lined Zouave Wood and held it.  They were grand, and nothing could move them."


Although Percival survived this battle more than 50 of his comrades did not.  In all, 14th Division lost 2,500 men.  Lieutenant Blagrave fell on 12 August 1915 trying to rescue men trapped by enemy shelling in the cathedral at Ypres.  After the war around 40 bodies were found in a cellar under the Cloth Hall at Ypres, members of B Company, 6th Battalion DCLI.

The 14th Division was to play a part in one of the early battles of the Somme, that of Delville Wood in July 1916.  General Haig ordered that Trones Wood be cleared of Germans so as to protect the British forces' right flank.  The battle for Trones Wood began on 14 July and by the following afternoon the 14th (Light) Division and 18th (Eastern) Division had taken the Wood.

On 15 September 14th Division were again in action at the Battle of Flers-Courcelette, the third main phase of the Battle of the Somme .  This battle is notable as the first in which tanks were used (49 were deployed, although not all made it into action).  14th Division were still holding part of Delville Wood and their objective was to clear out the last pocket of German resistance, which they achieved.  The following day the Division was unable to make further progress, let down by inadequate artillery support. The offensive began again on 17 September and continued until 23 September, during which time Percival lost his life, in an offensive which failed to gain its chief aim of pushing a hole through the German lines.

Percival is commemorated on the Thiepval Memorial as well as Newquay War Memorial and a plaque in St Michael's Church (with his brother, Gerald).

In an edition of the Cornish Guardian on 1 September 1916 there is an article about the Collins brothers.  This mentions that Percival attended St John's College, Oxford after leaving Rugby School.  When war broke out he was intending to join the Indian Civil Service, but joined up instead.  He was a good lawn tennis player,
being a member of his College team.
Posted by Unknown at 04:28