Today's post is a little different, in that the subject is not listed on the Newquay War Memorial.  You can, however, find her war grave in the town's cemetery on Crantock Street. 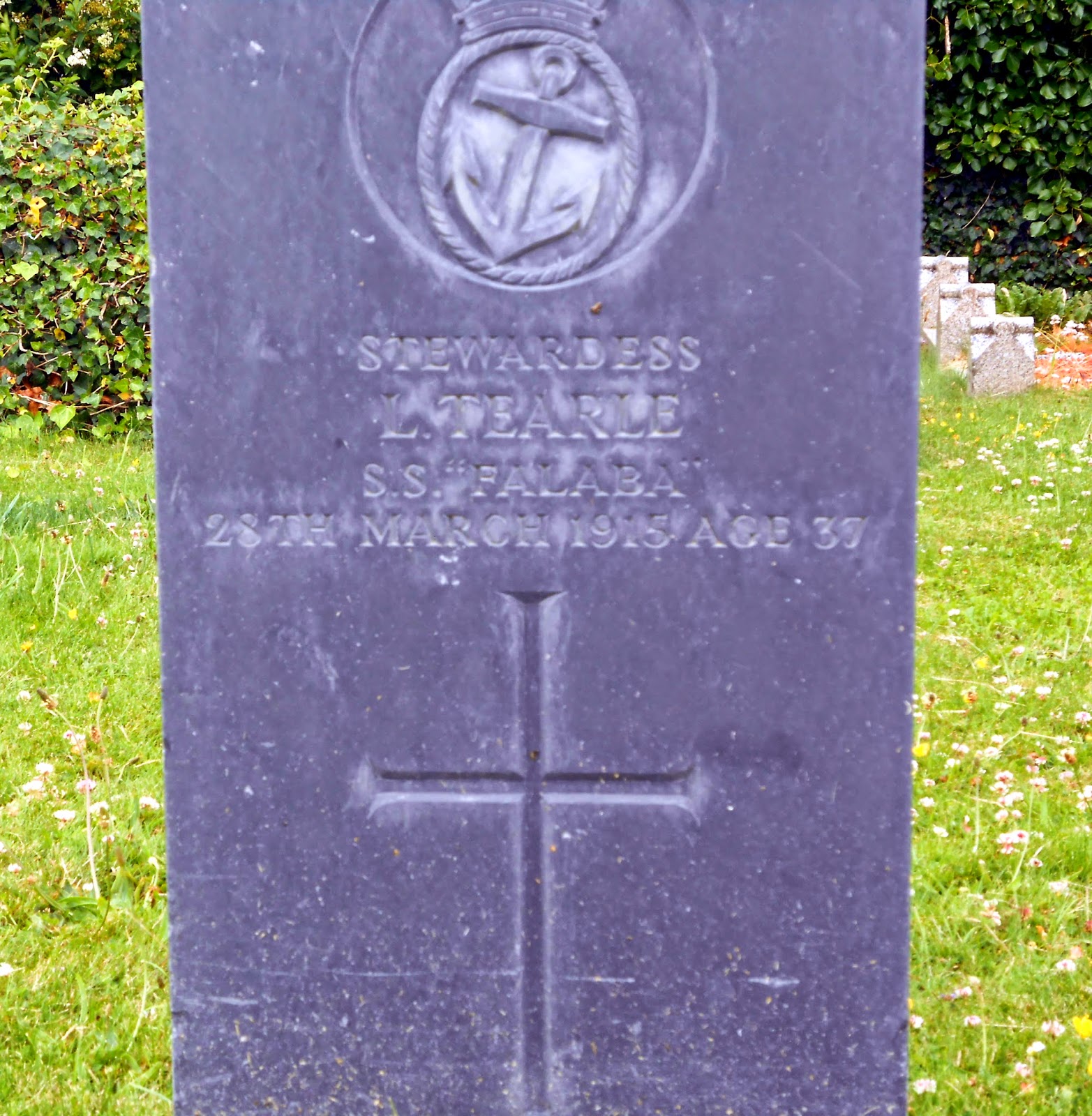 Louisa was the daughter of Arthur and Emma Lees (nee Farnham).  She had a brother, George Farnham Lees, who may have emigrated to Canada sometime after 1911.

In 1902 Louisa married Henry James Tearle, who worked for the Elder shipping line.  The couple had five or possibly six children:

There is also reference on some sites to a brother named Ivor who died at the age of 16, although I have not been able to find any records for him.

Henry Tearle was killed in Lagos, Nigeria in 1914, in unknown circumstances.  Louisa, who may already have worked for the Elder Line, went to sea as a purser according to some accounts, although she is listed as a stewardess.

The SS Falaba set off from Liverpool for Sierra Leone with 95 crew and 147 passengers. After leaving Merseyside on Saturday, 27 March, she met U-28, captained by Baron Siegfried Von Forstner in the Bristol Channel.  The U boat gave the Falaba 10 minutes to dismantle her wireless equipment and abandon ship.  According to the Germans, the crew of the Falaba used this time to try to contact the Royal Navy with the position of the U boat.  They then allowed a further 10 minutes for the lifeboats to be launched before firing.  The British claimed that they were given only 10 minutes and were then fired upon, the Germans laughing at survivors as they struggled to get aboard lifeboats.  The Germans refuted this, claiming that they were in fact moved to tears to see lifeboats being overturned in the rough sea.

The ship went down rapidly and although the lifeboats were launched, 104 people perished (57 passengers and 47 crew).  One of those who lost his life was an American, Leon Chester Thrasher.  His death almost sparked the entry of the US into the war, but assurances that the captain of the Falaba had been given adequate time to launch the lifeboats and a suggestion that she carried contraband explosives allowed the US to back off from war - until the sinking of the Lusitania.

Louisa's body must have been recovered by a Newquay boat, although I've not found when she was brought ashore.  Her children were now orphans.  Gertrude, who was partially sighted, became a successful teacher working in both the UK and Australia.  Her youngest brother Donald was adopted by an aunt who emigrated to Australia in 1925. He became a miner and enlisted with the Australian Army  in 1939.  He was taken as a Prisoner of War in 1941 and interned until the end of the war.  He was later granted the Military Medal for bravery.

On Donald's records he listed his next of kin as his brother, A J Tearle, HMS Rosemary, Portsmouth.  I can find no other information on Louisa's other children, particularly "Ivor" who is mentioned as being an inspiration to Gertrude and who was apparently, like her, partially sighted.

There is a copy of the British inquiry into the sinking of the SS Falaba here.