Richard was the son of Charles Rowett and Florence Annie Pengilly.  Charles and Florence married at Redruth in 1893.  Charles was a mine engineer whose work took him abroad to Portugal and South America.  Several of the couple's children, including Richard, were born in Portugal.  Florence must have made friends in Portugal as she continued to travel back to the country after her husband's death.  The Rowetts had seven children, five of whom survived infancy:

The three youngest boys were all born in Portugal.  In 1911 Florence and the five children were living in Scorrier.  Charles shows up on immigration records as arriving back in the UK from South America in late 1914.  He died soon after, aged 44, on 1 March 1915 . His probate records give his address as 1, Colchester Villas, Newquay and his occupation as mine engineer.  Florence was left £200.  She later moved to 43 St John's Road.

Richard joined the DCLI at Truro.  He was posted to the 1/4th (City of London) Battalion (Royal Fusiliers). The 1/4th were part of 56th (London) Division and Richard would have joined them at the Third Battle of Albert between 21 and 23 August 1918 (a phase of the Second Battles of the Somme).  The 1st DCLI were also at the Battle and the Regiment history notes that Friday, 23 August was an exceedingly hot day.  It was also exactly four years since the British first met the Germans at the Battle of Mons.

The British offensives in the summer of 1918 marked the beginning of the end for the Germans.  Sadly, there were still many casualties, including Richard, in the final months of the war.  Richard is buried at the Bucquoy Road Cemetery. 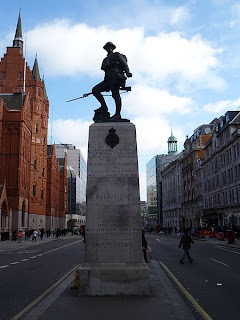