Walter was the son of Walter Spiller, a blacksmith, and his wife Agnes Cecil ("Cecie") Matthews.  Agnes was from Newquay, where her father earned his living as a sailor.  Walter and Cecie's marriage was registered in Taunton in 1889.  The couple had several children, born in Devon and Somerset:

By 1911 the couple were living in Trevena Terrace, Newquay.  Sadly, their daughter Guilo (or Guila) died in that year.  Walter is described as a "worker" on the census of 1911, but no occupation is listed.

Walter's medal card shows that he joined the RAMC and was then transferred to the London Regiment.  I believe that he was part of the Egyption Expeditionary Force and lost his life at the First Attack of Amman.  The EEF had to march to Jordan from Jerusalem and had considerable difficulty in bridging the River Jordan.  Australian, New Zealand and British swimmers made several attempts to take lines across the river so that pontoon bridges could be built.  They did this under heavy fire from the Ottoman troops on the opposite bank.

Major General Shea, commander of the 60th (London) Division, to which Walter was attached, was ordered to attack Amman with the object of destroying a viaduct and tunnel, thereby disrupting an important Ottoman railway link.  Amman was the headquarters for the Fourth, Seventh and Eighth Ottoman armies; a number of German troops were also stationed there.  Shea was to attack with his Division plus the Anzac Mounted Division, the Imperial Camel Corps Brigade, 10th Heavy Battery RGA, a light armoured car brigade, Desert Mounted Corps Bridging Train and pontoon building units.

Shea's force was successful in crossing the Jordan and taking the town of Es Salt but then faced a trek across treacherous terrain in abysmal weather (sleet and heavy rain) to Amman.  The time that it took to make the march gave the enemy plenty of time to prepare their defences and they were ready for Shea when he launched his attack on 27 March 1918.  The battle continued until 30 March when a retreat was ordered.

The London Division suffered 476 casualties, including Walter.  He is buried in the Damascus Commonwealth War Cemetery. 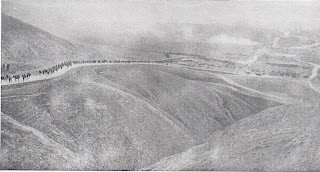